A Messed Up Project

When I spotted Pat's beautiful twined hat, I wanted to make one just like it. So much that I bought the identical yarn (Crystal Palace Toas, 100% wool) and paid money for the pattern. 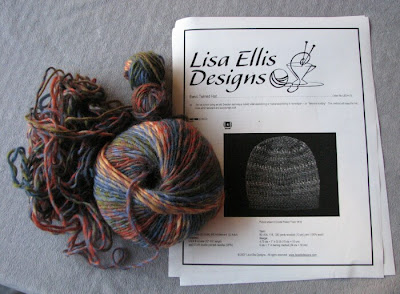 I consider myself above average at being able to follow written directions. I fully expected to be able to read this pattern and twine a hat, knitting from both ends of the skein.

The ribbing is a double knit. I managed to get that OK. Then came twining in the knit stitch. The very first thing the pattern says is, "Swedish knitters traditionally pick - but throw the 2-end knitting." That was my first clue I might have a little problem with twining. I knit continental (pick) and have no idea how to throw. Still, knitting is knitting.

Instructions included steps like, "Drop yarn used to the left of the needle", and warnings that the resulting stitches should look like herringbone on the wrong side and not like fair isle. I thought mine looked like fair isle (I've never knit fair isle) so I had a spasm and frogged the whole thing. Then I went back to admire Pat's beautiful twined hat. She has a picture of the inside of her hat and realized was twining correctly with no need to rip.

Now I have a mess with the two strands sticking together. They need to be rewound separately with lots of untwisting and untangling.

The urge to knit this hat is temporarily gone. I'm knitting simple, one stranded socks right now. I'll probably give the hat another try before the winter is over.
Posted by Marguerite at 11/03/2008 04:21:00 PM