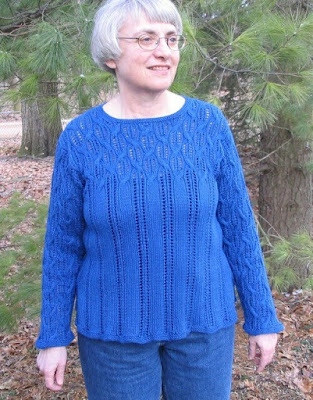 This afternoon during a brief interlude of sunshine, I put on Aguave and headed outside to have DH take some pictures.

His method of taking pictures is to fumble around until I get a weird look on my face and then snap it. Sometimes it doesn't matter what my face looks like, because he chops off my head.

But, he's willing to do it and I appreciate his efforts. These are the best two. 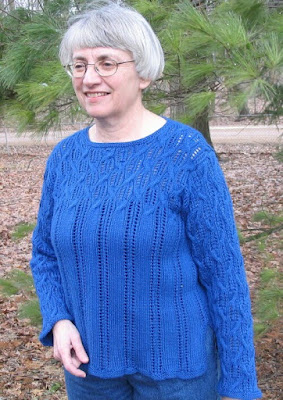 In these pictures, Aguave is over a navy cami with a shelf bra. I think it would look better over a dark blue tank top worn with a real bra, so I have some shopping to do.

My goal was to assemble and block the Aguave and Hanover jacket before the next installment of FLAK is posted.

Hanover is sewn together as of last night and this afternoon I finished weaving in the ends. It's ready for a bath which may or may not happen tonight.