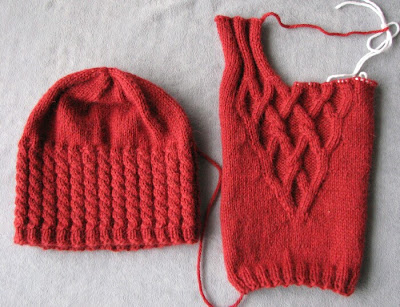 Over Thanksgiving weekend I decided to celebrate having all my Christmas knitting done. There was a box of Knitpicks Andean Treasure baby alpaca in the corner calling my name. 16 skeins of Mystery Heather (dark gray) and two skeins of Hot Red Heather.

Always swatch with the color that's going to be used because different colors knit up at different gauges.

I had fun knitting the hat, so I finished off the weekend by swatching my plan for the neckline. In red. Breaking the same rule. 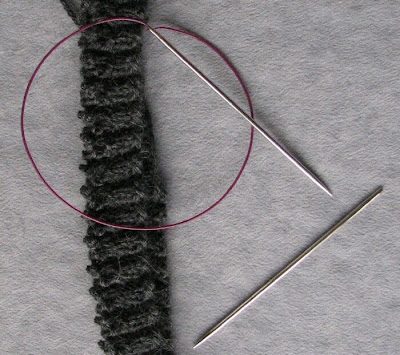 A few evenings later when I was tired and not thinking clearly (there always has to be an excuse when stupidity is admitted publicly), I decided that even though my swatches hadn't been washed, I could at least cast on the lower ribbing in gray and knit for a while before going to bed.

The gray yarn is nothing like the red. It's much fuzzier. Knitting it on the same size needle, #3, the knitting was so tight I could hardly move the stitches along. The cabled ribbing didn't show through the fuzz.

But being tired and brain dead, I kept going until all the pulling separated the needle from the cord. Another rule of knitting:

When something feels awful in your hands, especially something as wonderful as alpaca, just STOP knitting and replan the project.

Thank you for providing an opportunity to learn from your experience. ;-) (even though I know that you know better.)

I wish I could say we would learn from your experience, but experience tells me that doesn't always work. I always think I can break the rules. Somehow I think I'm special, but it often comes back and bites me!

I had no idea!! Why are the colors a different weight? I would break all of your rules, for sure!! And be in big trouble...

I also recently learned how different colors knit at a different gauge after knitting a second Thorpe hat with the same but diffeent color yarn. The second hat would fit a giant.(LOL)

Mamere Knits Too Much said...

my needle did same thing ~ a drop of super glue ~ shove it back in & wahlah!

I had no idea either! Thanks for the enlightenment at your expense...

What a wonderful blog, sharing your experience for the benefit of your readers, you make learning a natural part of reading your blog and enjoyable to boot.

I had no idea that could happen with different colors of yarn. I love the hat pattern.

I have heard that KnitPicks is very good about replacing needles when they separate like this if you give them a call. (Not that the replacement does any good until it gets there!)