This has been a week of extreme heat and humidity. There's been occasional light rain which steams up off the ground to create more humidity while not lowering the temperature at all.

It's way too hot and not the right time of year for nesting bluebirds. But they did it anyway. 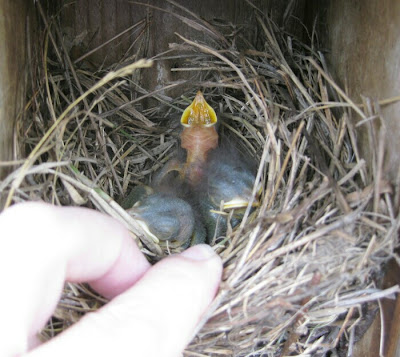 Three of the four chicks are still alive.

The chick with the open beak is not as developed as the other two. I'm guessing it's not going to be strong enough to make it through the heat. Maybe none of them are. 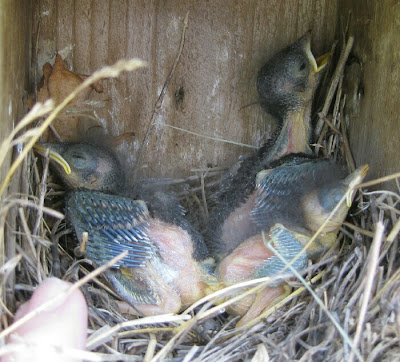 The hatchlings are old enough to be freaked out when a human opens their nest box.

Two are growing pin feathers and looking strong. The weak one (front right) is looking doubtful for survival.

A few days ago when I opened the box the adult male was on the nest with his wings spread over the chicks. To keep them cool? To keep the mosquitoes off? The mosquitoes are so thick this summer I can hardly stand to be outside and the naked little birds are an easy blood feast.

I always knock on the box before opening it to give the adults a chance to fly out if they’re inside. Dad bluebird wasn’t moving off that nest. I shut the box and left as quick as I could get the flap down. 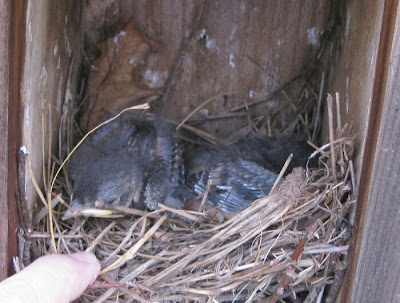 And then there were two.

These two have been through the worse in weather and mosquitoes. Their feathers are quickly growing in and they will likely live to fledge. 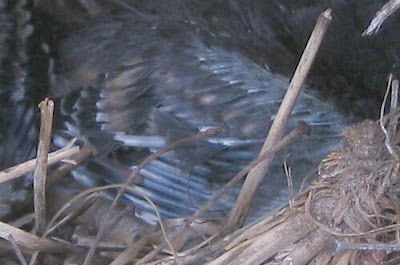 Here's a close up of the emerging wing feathers.

In just three more days these little ones will have enough wing to practice being airborn by jumping up and down in the nest box. After day 12, I won't open the box again to keep them from jumping out prematurely. Their first flight into reality should only be initiated and monitored by their parents.

Email ThisBlogThis!Share to TwitterShare to FacebookShare to Pinterest
Labels: Birds

Thanks for the update! I wonder where the third bird went? Do the parents tend to such things? It's pretty hot here today...the natives start to wither when it gets much over 80!

It's been a hot week, and we've had well problems since last Thursday. I feel for those little birds!

What a blessing to get cold water right out of the faucet again.

New life is just so amazing.

The poor baby birds, I hate mosquitos, the ones in California are small and I usually don't get bit, my one trip to Wisconsin they practically ate me alive, 5 bites while I was running my friend's house and they were GIGANTIC. It is difficult to see little ones die no matter what the species. I do hope you like Mrs Pollifax.

This is really interesting & I am glad that at least 2 made it.

So what happens to the birds that don't make it? Do the parents get them out of the nest?

Thanks for the running commentary. Really enjoyed it!

Once again you've come up with some wonderful nature photos. I can't even imagine how hot it must be in that box. I guess I should quit complaining! At least here we don't have the humidity.